Over 25 years of use by a great number of listeners and therapists have established that that Multidimensional music is a subtle vector of conscious evolution, inducing self healing and activation of subconscious potential.
Jacotte CHOLLET’s music is vibrational, resonant, interactive, evolutive, transformational, stress relieving, inspiring, harmonizing, unifying, consciousness and energy expanding, vitalizing, regenerative.

LISTENING TO THIS MUSIC
– Sets multiple dimensions of the SELF to vibrate and resonate.
– Shapes invisible fields of subtle energies that have been fragmented to consciously and harmonically integrate them.
– Concurs to awaken, to re order, to harmonize and render more coherent dissonant* patterns of information responsible for multiple disorders in the body mind.
– Induces brain synchronization, balance and integrity of the bio energy field.

Its harmonic frequencies entrain a healthier, more self-conscious, more intuitive, more creative, more spiritual way of being.
It is a subtle tool for conscious evolution bridging the gap between who you actually are and whom you can be provided you are given a chance to restore inner coherence and activate subconscious, dormant potential : INSPIRATION, INTUITION AND CREATIVITY.

Multidimensional music is a subtle vector of conscious evolution, inducing self healing and activation of subconscious potential according to the listener personal need.

How was it created and where does it come from ?

I have chosen to create music out of mere experience, only when I would be in touch with my inner source so as to stay free of outer influences and fads.
It is created LIVE, never re arranged, rectified or corrected afterwards.

Whenever I feel an inner drive to play, this is the signal ! Inspiration is coming to me, a specific vibration takes possession of the whole of my being, powerful energy rushes up along my spine and offers me access to the higher spaces in which music is the only component.
When I reach this state of total flow and full inner presence, it is a privilege to experience a transcendental  in which my 2 hemispheres are naturally synchronized and open me to ONENESS.

In these exceptional states of consciousness, I don't really know  if I am actually playing the music  or if I am being played by music?
This is my way of embodying the words : As above so below.

The term multidimensional was chosen after witnessing multi-dimensional effects of the music.

The higher state of consciousness and inspiration in which it is created triggers a specific vibrational self conscious resonance in the listener, inducing ALTERED STATES OF CONSCIOUSNESS during which people connect with their higher SELF, explore hyperspace, fly into their cosmos, experience being HEALED BY BEING FROM CELESTIAL REALMS, freely travel in space or time inside their body, their cells, their DNA etc…None of these exceptional experiences can be reproduced at will, they just occur in response to specific needs of the listener, just as you never have twice the same experience of life.

This Music re orders correct electric potentials in cell membranes which provokes release of toxins, hyper oxygenation of the blood, jump of HEMOGLOBIN level (increase of red cells number) and stimulation of the immune system.

Resonance with this music  induces This Music aligns soul / Mind /body and provides access to the highest qualifications of the being:
INSPIRATION, INTUITION AND CREATIVITY.

The Multidimensional Music of Jacotte CHOLLET has the capacity to take its listeners into a non-ordinary realm of experience where they can evoke creative ideas, obtain clarity about life decision, find peace of mind and body, or interact with the impressions stimulated by this unique program. Madame CHOLLET has produced an original technology for the 21 st century that is inspirational as well as enjoyable.

READ MORE ABOUT SPECIFIC ASPECTS OF THIS MUSIC

EFFECTS OF THIS MUSIC ON BLOOD CELLS

It re orders correct electric potentials in cell membranes which provokes release of toxins, jump of HEMOGLOBIN level (increase of red cells number), hyper oxygenation of the blood, and stimulation of the immune system

In 1992, I collaborated with a well known French Quantum Physicist, MD, Consciousness writer and professor of Physics at Poitiers Faculty of Medicine: Régis DUTHEIL and a French Biologist Lydie RIES.
This collaboration led me to foundation of the Institute for development and expansion of Consciousness where a number of Consciousness Expanding workshops induced by resonance with Multidimensional Music were held.

Each workshop was fully documented by repeated biological testing and study of psycho-physiological effects of the music before and after sessions 50 to 60' long.

For the present time, The method that is closest to the new paradigm of medicine for the XXI st century is Multidimensional Music from Jacotte Chollet, because it transforms at the same time our bio-electromagnetic field and our consciousness.

It induces neg-entropy*. There is, first, an auto-diagnosis effect followed by a therapeutical effect as it brings into awareness traumas long time encoded from the past and corrects the field of information at the same time.

At this level of consciousness, the usual perception of time no longer exists, our multi-dimensional body extends beyond locality as well in the past as in the future.
(*NEG-ENTROPY is orderly information which organizes structures and functions of living systems and participates in intercellular bio-communication.)

EFFECTS OF THIS MUSIC ON BRAINWAVES

Positive effects of Jacotte Chollet's music have also been measured and demonstrated at the Institute of Higher Nervous Activity and Neuro-physiology in Moscow,  by professor Dimitri VALOUEV, psychotherapist, psychologist, psychiatrist, member of the Russian Academy of Sciences.
Measures have been performed with sophisticated equipment giving a clear image of brain activity, information distribution, hemispheres synchronizing and entropy.

THE STUDY HAS COMPARED THE EFFECTS OF MULTIDIMENSIONAL MUSIC BY JACOTTE CHOLLET WITH MEDITATION STATE WITOUT MUSIC.
Commentaries below are by professor VALOUEV

IN THE STUDY OF MEDITATION WITHOUT MUSIC :
We notice considerable reduction of cortical activity by low frequency waves.
at the same time BETA waves keep very active and chaotic (agitative, erratic thoughts). 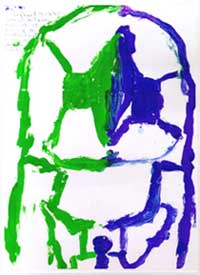 THIS DRAWING REPRESENTING THE BRAIN, HAS BEEN SPONTANEOUSLY DONE BY A 7 YEARS’ OLD BOY DURING A SESSION WITH  CD INVISIBLE PRESENCE.

To be capable of drawing with both hands at the same time, requires synchronized use of left and right hemispheres.

The drawing shows this action has been taking place while the little boy was in tune with this music, although he was not informed about a possible effects of the music on him.

MULTIDIMENSIONAL MUSIC® DOES NOT REQUIRE LISTENING TO IT WITH EARPHONES TO DISPENSATE BRAIN SYNCHRONIZING, it works as well with listening to it with speakers because this specific capacity of the music is not issued from an audio-engineered process forcing the brain to synchronize.

Dr Jeffrey Thompson from San Diego has demonstrated that a state of bliss, an exstatic feeling induce spontaneous brain synchronization.
Created under such conditions, Multidimensional Music ® conveys brain synchronizing as a side effect of the state of Superconsciousness and unification it was created in.

EFFECTS OF THIS MUSIC ON CHAKRAS

Research was done in Bio RESONANCE Institute IMEDIS of Dr Sergei KAZAKOV, Moscow, Russia.
Measures were made with a special instrument detecting levels of energy in the chakras with electrodes.

Dr Kazakov has been using this technique for years in order to objectivate deficiency of energy in different chakra and also to determine which medecine was appropriate to compensate energy deficiency.
This instrument can as well measure correct glandular activity.

Higher creativity is our true nature.

IN EACH AND EVERYONE OF US

In each and every one of us, there’s a cave to be searched and a wealth to be touched,
a heart to be felt, throbbing with life, filled with miracles.

In each and every one of us, there’s an artist to be born and a teacher who knows
and a healer who heals, provided that we ask (for it).

In each and every one of us, there’s a magical child who plays and loves to do so,
the child created this music as a gift and a proof,
how could it be in me and not in you ?
It is a shortcut and a link to the source waiting for you,
an almighty software, very soft and fully aware,
ready to fulfill your desire and answer your prayer.

You can use it immoderately to your own contentment,
there is no limit to its power,
the more you use it, the more it grows and the more it flows,
the more it glitters and resonates in an endless smile,
like the light, at dawn, when it dazzles
and the stars at night when they twinkle,
reminding us of WE ARE ONE.

some call it the divine and look for it in churches or temples or power places,
some call it art and think it is reserved to a few who have been chosen…

yet, the only way I know to be part of the chosen ones
is to choose and elect ONE’s SELF,
and pay attention to the grandeur it deserves and the respect it requires.

Let it resonate in accordance with the music,
let it spring and flow,
let it answer your prayer and fulfill your desire,
let it show you how unlimited you truly are.
It’s not in the Past and not in the Future,

It’s in the Contact with the source of all being
WITHIN YOU,
right NOW !

SEE our Listening Guide : HOW TO LISTEN  for best conditions of listening and optimal result.